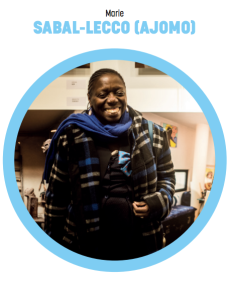 “In my paintings the idea of movement, dance, light and joy is always present.”

With their warm, bright colors, her paintings engage many different styles and themes, as they captivate the eye and make reference to our history. Her first style uses repetitive movements and multiple bodies stuck together, in chains. It condemns slavery, violence
and racism. But the paintings are gentle, not abrasive, and the notion that all races are equal and united is prominent. The second is a soft style, filled with pastels and curves, suggesting the idea of a female protector, which is very important to the artist.

Women embrace their children, of all colors, as themes of motherhood, brotherhood and
family characterize all the artist’s work. Finally, Sabal-Lecco is inspired by an angel style, for she deeply believes that “everything is possible.” In this style, world maps and terrain appear in harmony: the woman holds the Earth in her arms.

The artist engages in several humanitarian causes. In 2007 she donated a piece to be auctioned for the group Sidaction. She also participated in the Amnesty International campaign on conflicts in Africa, offering the international organization ten drawings on the theme of “Forgotten Women, Victims of Wars” on the continent. She works regularly
with children, conducting “introduction to art “ workshops in Paris and its environs.

Of the fifty exhibitions in which she has participated, some of the most recent are: November 3rd to November 9th, 2010, in the Town Hall of Montreuil, for the fiftieth anniversary of the Independence of Mali; May 10th to 12th, 2011 at the UNESCO
headquarters in Paris to commemorate the tenth anniversary of the “Taubira law” and the “recognition of trafficking and slavery as a crime against humanity. “ She attended the first festival of the association “They Resist” in Montreuil, 2012, and returned in 2013. In addition, from November 25th to December 1st 2013, she participated in “Hivernales”
at the Paris Convention Center.